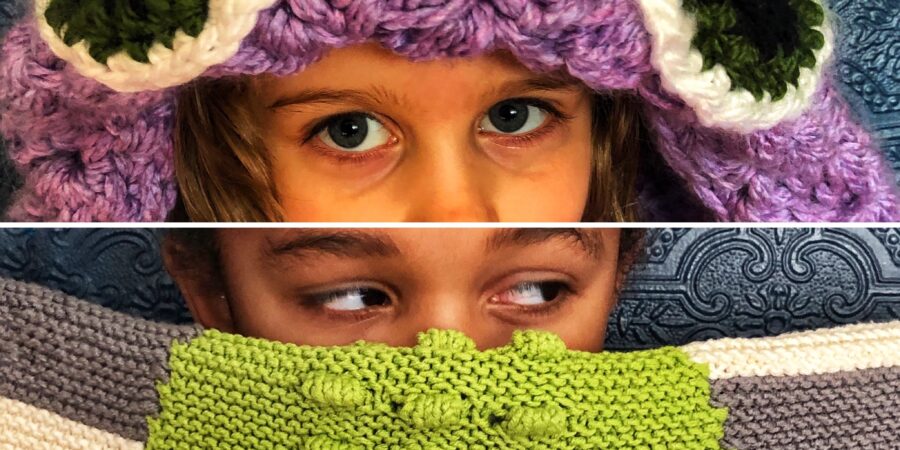 Many kids have a special fondness for a particular blanket. Sometimes that fondness borders on Linus Van Pelt-esque neurosis, as many a parent could attest, but I’m not gonna judge. Blankets rock. I know it – you know it. I talked all about it in a previous post. My grandkids are no different. They love their handmade “Nima blankets.” We had plans to see them live and in person this September, and there’s no better motivation than a good ole deadline, so some time in July I decided they were both getting fresh, hand-delivered blankets. I had a whole, like, month or so…no sweat.

Okay, okay…a smidge of sweat…and maybe a teensy bit of cursing that would have made the surliest longshoreman look up and nod approvingly.

As you may recall, the Googly-Eyed Gator has been in production (okay, time out) for quite some…um…years now, so it was clearly the time to FO this WIP (jargon – the knitters will get it). This project should really be renamed the Tedious Googly-Eyed Gator, but more on that a bit later. As Tedious Gator was earmarked for the grandson, I needed to whip up an equally love-worthy counterpart for the granddaughter. Yarn accumulating genius that I am, I had at some point acquired a kit for a crocheted and hooded Bulky & Quick Cat Blanket in grandkid-approved purple. And tool accumulating genius that I also am, I even had the correct super-giant crochet hook sizes required to make it happen. My summer blanket party was ready for some bad ass roof raising.

To add insult to injury, the bobble sections (I’ve said it before and I’ll say it again – bobbles suck rocks), which look relatively okay laying flat, became a floppysloppysaggy mess when the blanket is picked up.

See how the bobbles are all akimbo and wonky-like? Intolerable. The first problem was something I realized – waaaay too late – that I could have corrected easily while I was knitting. The bobbles are constructed by knitting a little four-stitch, eight row strip mid-row. Unlike standard bobbles, there is no decrease that brings all the stitches back into one, thus closing up and stabilizing the deliberate lump of knitting. These suckers are just left as is. So, as you can see, like one’s belly button, they can easily end up as innies instead of outies. This also makes for very wobbly, unstable fabric, because of all those extra stitches condensed into one area. I could have – I should have – taken a second or two on the return row of the bobbles to bring the lower and upper edges of the strips together and closed them up by joining two purl bumps invisibly on the back. Instead, I had to sew them shut by hand, one…by…one. Well, you didn’t have to, you’re going to say, but c’mon people, you should know me by now, yes, yes I did ABSOLUTELY have to. The top four or five rows of bobbles in the pic above are sewn shut and tidy as can be.

The next issue was all those woven ends. The yarn I used was a non-wool blend of slippy slidey plant based fibres, so no, those ends were not going to stay in place considering the wear and tear coming their way in the form of a rambunctious 6-year-old. Ergo, my next task was lining the back with a soft, stretchy jersey. Hand stitching it around the edges of the back wasn’t that big a deal, but when I picked it up, it was all floppy again. The weight of the garter fabric was pulling away from the jersey like it had bad breath or something. There was only one solution: quilting.

Given my self-imposed deadline, there was no way time-sucking hand quilting was happening, so I threaded up my machine, prayed to whatever atheist-friendly deities would be willing to hear me, and stuffed it under the needles. I followed the garter ditches between the stripes and made a few more short passes through the gator’s body. It worked…and without bunching, scrunching or making me cranky.

Finally. All done and ready for love.

Happy ending (and kid) or not, I won’t knit anything like it EV-ER again.

Now, I’m sure you’re cat-curious about what manner of trials and tribulations did I have with the fiddly-looking crochet blanket? After all, as you know, I’m merely a crochet novice at best, so surely there was at least a patience-testing learning curve or some teeny tiny cat-tastophe (see what I did there?).

Nope. Nada. Nowt. I cranked out the whole thing, start to finish, smooth as silk, in about two days. TWO DAYS. Tedious Gator sat on pending needles for TWO AND A HALF YEARS. Kitty Cat is equally cute and loved. Is there a lesson here? I’ll let you draw the obvious conclusions.

See you soon to catch up on more of my recent knitting adventures.

Knit (or crochet) well. You got this.

1 thought on “The Eyes Have It”