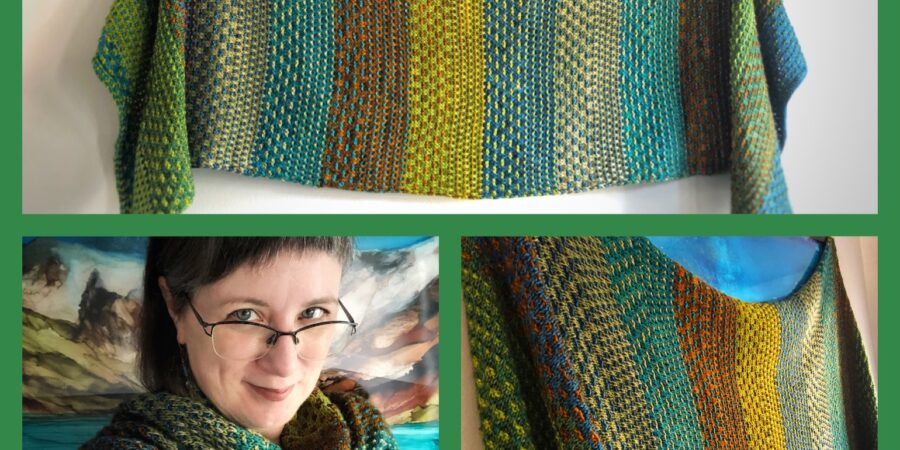 I’ve been getting all philosophical about my knitting lately. Mostly what that means is I’ve been thinking about the “why” of my knitting quite a lot. I’m realizing that time is not on my side, people. Yeah, yeah, I’m only in my mid-fifties, but still, my knit-related bucket list is long…really really long. Every minute between now and the end of my knitting career, whenever that will be, counts, big time. From now on it’s gotta be all about priorities, my knitters.

This past week I moved my borderline claustrophobic knitting/sewing studio to the slightly larger (honestly, it’s bigger on the inside) room next door. It was a lot of work, but I truly delighted in the process of assessing, culling, organizing, and touching almost every yard of yarn I own. As I sorted, I gathered all the pre-organized projects (yarn, needles, patterns, etc.) I am wont to tidily assemble into zippered mesh bags and stacked them in one spot. I stopped counting after a couple dozen. That’s literally tens of projects, most of them sweaters, a few potential original designs, some already swatched, patiently waiting for my attention. It goes without saying (and yet, I’m sayin’ it anyway), that like any self-respecting knitting addict, new project ideas (squirrel!) get added to the queue all. the. time.

Concurrently with the projects-yet-to-come, a second category of artifacts emerged: projects already successfully completed. Again, as I fastidiously gathered like-with-like, a rather substantial quantity of perfectly lovely, yet almost never worn, scarfs and cowls began to accumulate. This be a mere sample:

The knitted nuggets in this photo represent dozens of hours of work – precious, precious hours – and for what? Surely not solely to decorate my studio? I’m chagrined to admit, yes. Sure, they could maybe possibly have other potential uses – teaching samples, gifts, etc., so I won’t go so far as to declare the time wasted, exactly, but the point is that I could have put that valuable knitting time to better use. I coulda given these projects more thought than “hey, I have this yarn and this pattern and I can knit this thing…”

Ah yes, and we have arrived at the crux of the matter – the point. What exactly is the point of the time I spend knitting? Big question, I know. I warned you I’d be getting all existential about this. The elusive “they” say there are two types of knitters: product knitters and process knitters. Product knitters are in it for the finished thing. They are the ones who generally complete most or all of their projects – because they really want that knitted thing. Process knitters, on the other needle, tend to be less concerned about the outcome (the thing) and really just want to experience knitting itself, play with yarn, if you will, be present, yaddah yaddah yaddah. I’m radically simplifying, of course, but we can leave the in depth discussion for another post. For now, let’s just say that I was once strictly a product knitter, but in the last few years, as I’ve allowed myself to experiment more with my skills, I find myself more and more amused and entertained by the knitting process alone, to the point where I and will sometimes swatch merely for sh*ts and giggles. However, having clearly spent a lot – A LOT – of time mucking about with projects I now recognize I have little practical use for, I’m finally embracing that my best knitting self can be a process knitter who produces a thing she actually wants to wear and wear with pride.

This brings to me to the project o’ the week and its particular point, or pointlessness, as turns out (a little foreshadowing there for ya). It starts with this a-ma-zing Andrea Mowry shawl pattern called Nightshift.

This is the ultimate looks-way-harder-than-it-is pattern, which would explain why it’s been knit over 7,000 times according to the Ravelry project database. Part of its genius is that the complex looking color work is all easy peasy slip stitches (that means you are only ever working with one color at a time per row). The breath-taking part is all in the yarn selection. I love this so much, I’ve knit it twice – TWICE! The first one I knit as-is from my stash yarn:

I have been known to wear this now and then – it’s really too awesome not to – but…as you can see, it’s an asymmetrical triangle, and it’s too small because I should have used a bigger needle, and…well…it’s just not…something. I have come to the conclusion that triangle shawls and I are not compatible. I never seem to have success wearing them in a way in which they stay put and look good, even as I move about. Standing still – spectacular. Moving about – instantly sad and sloppy.

This brings us to the story of my second Nightshift. It’s all A Twist of Yarn‘s fault. A few months back, they fiendishly sent me an email promoting a new set of Nightshift yarn kits (the folks at Twist are simply brilliant at putting up kits) based Okanagan wine country themes. While all lovely, the particular one that practically reached out from my phone and kissed me on the lips was this Kalamaka Lake colorway in Malabrigo Rios:

You get it, right? I was really left with no option. The yarn arrived in the mail about mid-August.

So, as I already knew I didn’t want another uncooperative triangle, I thought I would be super clever and knit a parallelogram – straight in the middle with points on opposite sides at each end. That way the knit-on icord edging would still work as written, I just had to change the shaping a bit. Here’s the first version, which I finished during an RV trip in Banff, Alberta, all wrapped up snake-like around my neck:

You can’t see the points in the outdoor photo, but they are there…tucked in…because…I don’t like them.

Turns out, the problem with a parallelogram is that when it’s wrapped around your neck, both points are pointing in the same direction instead of being symmetrical. Trust me, it looks weird and stupid.

Okay, so the easy fix was to remove a point at one end and square it off. That would be different and cool, right? Sure, in theory.

No matter how I tried, I still couldn’t make it look decent wrapped around my neck (totally awesome Canadian-made shawl pin didn’t help much).

And so, off came the second point, leaving me with a simply delightful, and wearable, rectangle:

It’s the simplest of shapes, allowing all the fancy color and/or stitch work to shine through, and making it super duper easy to wear – wrap yourself in a mini blanket, secure (or not) with a groovy shawl pin, and go!

Okay, great – love it – thanks for the mods, but what if I want to just knit the darn thing as a rectangle starting from scratch?? (I’ve had this question a few times since posting my project on Ravelry). If I knit it again (which is entirely possible, because it’s such a satisfying knit), here’s how I would go about it:

How to Rectangle a Nightshift Shawl

Step 1: Using a provisional cast on method, cast on any even number of stitches. Mine has about 120 stitches and is about 20″ across, after blocking. It’s important that you use a provisional method, because you’re going to need those live stitches later in order to work an icord bind off to match the other end.

Step 2: Start following the pattern instructions at Section 7, ignoring the first set of instructions in that row (K3, M1L, K1) and just K5 instead. The rest of the row can be followed as written.

Step 3: Continue to work the pattern, eliminating the increases, “shifting” the colors as you like, until you’re happy with the length or almost run out of yarn. I used up almost all my 6 skeins and my finished length is about 68″ after blocking.

Step 4: Work the icord bind off, as written in the pattern.

Step 5: Go back to your provisional cast on, remove the provisional yarn, and put the live stitches on your needle. Using the two colors in your first section, work the icord bind off, as written in the pattern.

This week’s lesson: all my shawls from here on will be rectangle wraps, regardless of how they are shaped by the designer. When I can do so without giving away too much of the pattern, I’ll happily post the mods here so those of you who are also rectangle wrap converts can join me in basking in all the right-angled glory.

Until next time, knit well and knit what you wear. You got this.

5 thoughts on “A Pointless Wrap”