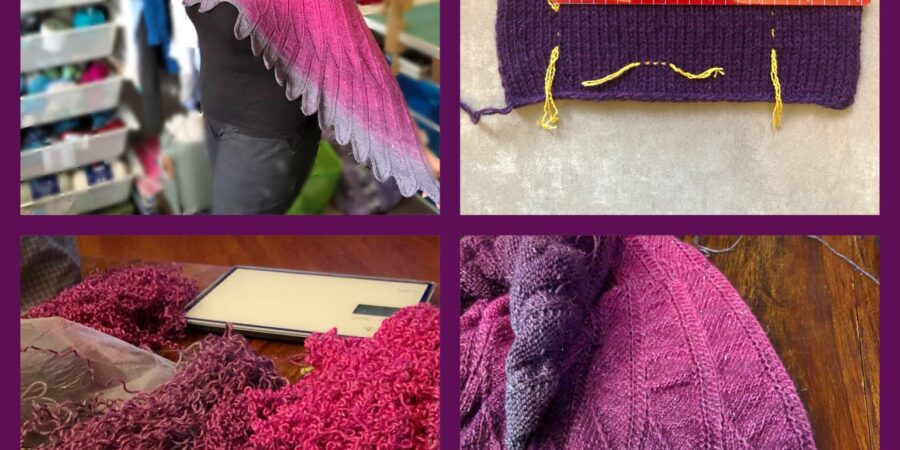 Ah, gauge…the bane of many a knitters’ existence. We diligently swatch, block, and measure, and just when we think we’ve got it – it’s snatched away for seemingly no reason at all and we’re sent slinking back to the proverbial drawing board with our heads hung low as we fling that lying liar of a swatch across the room. Hyperbole, you say? Nuh uh. S’truth.

For those dear readers who may not be familiar with the term, gauge is a measurement or reference of the exact size of stitch a knitter needs to achieve in order to produce a knitted item with the same measurements provided by the pattern’s designer. Gauge is almost always presented as a specific number stitches and rows equaling a set distance: 20 stitches and 27 rows = 4″. A pattern will provide a suggested needle size, but many knitters find that they need to use a smaller or larger needle in order to make that uber-coveted announcement to the world that they “Got Gauge.”

The yellow markers frame the number of stitches I’m supposed to have over 4″, but as you can see, I really have about 2 fewer stitches than I should have. This means that my stitches are bigger than they are supposed to be. Bigger stitches means that if I follow the directions for a specific size, my finished garment will be bigger than the measurements provided in the pattern. This may or may not be okay with me, depending on what it is I’m knitting, but even if I’m good with the garment ending up bigger, the problem is that it ends up bigger everywhere, not just in the target spots where I might want it a bit bigger. In other words, ignoring that you didn’t “get gauge” is not the ideal way to grade a pattern up or down to a different size. The fix for correcting my gauge on this swatch is to go down a needle size, so my stitches will be smaller. Yup, it’s totally possible that a smaller needle will result in stitches that are too small. If that happens, things get a bit complicated and I’ll have new decisions to make. Hooray.

Starting to see what I mean? BANE. All bane, all the time.

There’s a game that many knitters like to play called “It’s Only a Shawl, So I Don’t Need To Worry About My Gauge.” Sounds like fun, eh? It’s a really really popular game. On the Interweb’s knitting forums, I see people proudly declaring that they fully intend to play – and win – this superfunandtotallylegit game. I’ve even played it myself on occasion, with varying degrees of success. Then, last summer, a thing happened that will make me think twice about joining team #Idontneedtogetgauge. It’s a cringey and painful story, so buckle up, my dear knitters.

Almost two years ago, The Blue Brick yarn dyer posted an announcement on facebook that she would be taking online orders for special gradient-dyed skeins specifically designed for Kyle Vey’s brilliant Wingspan shawl pattern. This post was brought to my attention by someone who, I suspect, was subtly asking if this project could happen and be, perhaps, gifted their way. Well. Such a cool pattern and such a worthy recipient – I couldn’t resist. I ordered three different colorways within hours of when they started taking orders.

Then I waited. And waited. And waited. It turned out that the pattern and yarns were so popular that the yarn dyer was overwhelmed with orders. In fairly short order, she realized she had to find a bigger space for her studio, and hire and train help before she could fill most of the orders. Over six months later, my yarn finally arrived. The colors were rich and sparkly and enticing, but the timing was off and I set them aside.

Some time around the following June, I realized that I could probably start and complete one of the shawls before the recipient’s birthday about six weeks away. I scooped up the gradient hot pink to metal grey skein I had selected specifically for this person and got to work. The first thing I did to prepare was…nothing. Ab-sol-ute-ly nothing. It was a shawl, after all. Who cares if I got gauge? I had the exact yarn used by the pattern designer, how far off could it be? Without a care in the world, I picked up needles that were .25 mm bigger than the 3.25 mm the pattern called for, cast on, and got to work. A few hours into the project, my delightful dog jumped onto my lap while I was knitting and broke one of the tips of my brand new Tulip bamboo circs. This is a rare brand and I couldn’t quickly get a replacement, so I switched to the tips the next size up: 3.75 mm. I really wanted to try out these needles, and how much difference could it make, right? (spoiler alert: WRONG)

This was perhaps the most challenging pattern I had ever tackled. The knitting itself was straight forward – nothing more than knits, purls, increases and decreases – but the shaping of the wings and feathers required eleventy-million pages of written instructions, charts, and tables. Markers, markers, and more markers were the only way to keep track of what needed to happen, where, and when. Memorizing any part of this pattern was essentially impossible.

However, after making and correcting multiple mistakes, the work began to take shape, and I couldn’t resist a bit of mid-project blocking to get a good look at the feather detail.

After a few weeks of dedicated work and concentration, I was 3/4 of the way through the final feather sections, and way ahead of my deadline. Whoo Hoo!

Then, the unthinkable happened. Un thinkable. It soon dawned on me that, as I watched the balance of the single skein from which I was knitting shrink alarmingly, I was going to run out of yarn before completing the final section of the feathers. I weighed the remaining yarn. Yup – confirmed. My feathers were going to be tip-less. Oh no. No friggin way. That was not going to happen. My brain scrambled through every possible scenario in which I could salvage the situation, but…nothing. This was a single, gradient, indi-dyed skein. There was no running to the yarn store and scooping up the extra yarn I needed to finish. I was sunk. How could this have happened? I bought the exact yarn the pattern called for and I used the suggested needles (well, not really). How did this go so wrong?

Then, I remembered. I didn’t swatch. I didn’t check gauge. I knew that my stitches might be a bit bigger than the designer’s, but I’m a fairly tight knitter, so a larger needle size wouldn’t…bigger stitches use more yarn…bigger stiches use more yarn…SMACK! went my hand on my forehead. I had a limited amount of yarn – LIMITED. I needed to get gauge on this project. Ugh. My gargantuan bad. What’s worse…I knew better.

The only remedy? A visit to the dreaded frog pond. Rip-it, rip-it.

Two weeks of concentrated knitting down the drain.

With 3.25 mm nickel cubics, I took a deep breath and started over from scratch. On the up side, the second time went a bit quicker, as I now had a better understanding of the pattern and it’s quirks. I made fewer mistakes and the work went smoothly (thanks, slippery nickel plated needles).

Two weeks later, with a dram of yarn remaining, I was done, blocked and pleased with the result. It was handed off to its delighted recipient on time.

Happy ending aside, I implore you to heed this warning, dear knitters. Eschewing a pattern’s gauge is a dangerous game. An mere hour of swatching and a bit of forethought about my materials would have saved me two weeks’ precious knitting time.

Have you ever played “It’s Only a Shawl, So I Don’t Need To Worry About My Gauge” and lost? Let’s hear your war stories. Maybe we can stop history from repeating itself.