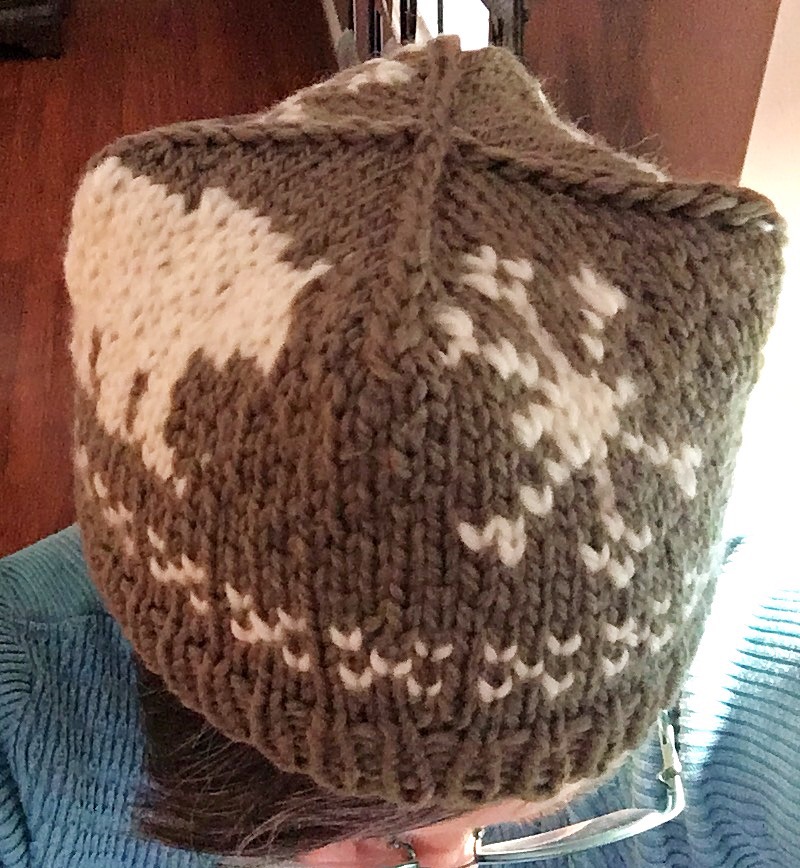 Seems there’s this thing that happens when you’ve been knitting for, well, ever – you start to believe that the rules don’t apply to you.

The latest issue of Knitscene has a most charming polarbearsnowflake hat.

I showed the pattern to my knitting group at work yesterday and they challenged me to have it knit (and a poncho pattern also in the mag) before next week’s class. Not one to back down from a knitting challenge, I happily accepted. I knew I had the yarn at hand and that it was just a relatively simple hat, in a bulky yarn, with a bit of stranded colorwork. Easy peasy. In fact, I found appropriate yarns for two lovely colorways – I could really show off and knit them both! I cast on with great gusto, assuming I’d have both hats done by the end of the following day.

Round 1: Cast on with cable method, as instructed and whipped through the 1″ of ribbing. Did an increase round and the started the bear chart. At the end of the first chart round, I realized that I had failed to read the instructions correctly and found myself two stitches short. Ripped back and did the second increase round.

Round 2: Got halfway up the bear chart and didn’t like the way my stranding looked. A lot of the carries were showing through to the front. I tried to evaluate what the issue was and decided that I must be catching the floats too frequently. Looked at the instructions, and sure enough they said to catch the floats every 4 stitches (I was doing every 2). Ripped back to the start of the chart and tried again.

Round 3: Got to the top of the chart where the crown decreases begin. Realized that the body of the hat seemed awfully shallow. Noticed a tiny chart for a checker pattern, just about the bear chart on the page I had copied for notes and markups. Flipped back a page in the magazine and realized that I had completely missed knitting the checker pattern before starting the bear chart. Ripped back to the first increase round above the ribbing.

Round 4: Success! Along with paying better attention to all those other issues, I also switched from magic loop to regular circular knitting. My tension improved immensely.  Still love magic loop, but interesting to know that going full circ could solve tension issues.

It’s  a really cute hat, as you can see, but it is truly aptly named at Bearly There – it’s very small. I think it would suit someone with a petite head. I felt a bit like I was wearing a kid’s hat when I tried it on.

I’m going to try the pattern again in a super bulky (Knitpicks Biggo), on a larger needle (8mm) and expect to get a larger, more substantial hat without having to do any changes to the pattern. Here’s the yarns:

I love the idea of the sky blue and fuzzy white. So wintery pretty.

Stay tuned and READ YOUR PATTERN and PAY ATTENTION. (Sorry, felt like I needed to be firm about this – mostly yelling at myself)