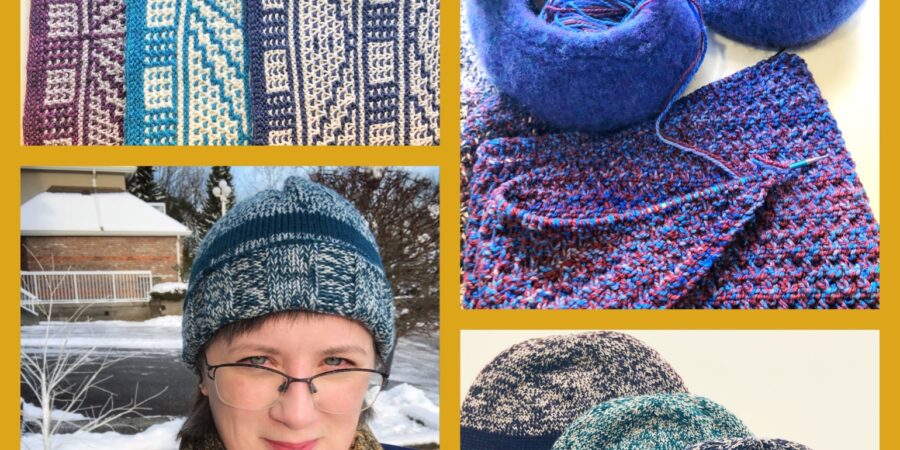 Variety is the spice of life. People say that. So, why oh why, on any deity’s green Earth would we (the royal we) want to knit the same project more than once??? Surely, you ask, that’s a rhetorical question, isn’t it? Well, my knitters, sit down, hold my beer martini, and hang on to your shorts because this post holds the answer.

Those of you who know me (hi, people who know me!!), will know that I am historically loathe to repeat a project. On occasion, some well-meaning muggle will suggest that I’ve knit something of significant interest to the world and that I should (ugh) “make and sell them.” At which point, I dig deep – way way deep – and respond with all the polite patience of a good-natured, friendly Canadian that not only is it financially un-viable to mass produce hand knits, but also that I would almost certainly lose my yarn-loving mind if I had to knit something twice.

The key phrase there being “almost certainly.”

Turns out, there exist projects that capture my imagination sooo much that I can’t stop myself from casting on one after another after another. Alright, stop with the telling already and get on with the show.

Behold Cecelia Campochiaro’s Striped Marl Hat from Modern Daily Knitting’s Field Guide No. 19: Marls. If you’re not familiar with MDK’s Field Guides, we need to talk. In fact, could be a whole post on its own. Also, Cecelia is a genius and the developer of my latest knitting addiction, but that’s also for another post. In the meantime, behold:

So much to love about this hat: It’s quick and easy to knit (had the pattern memorized by the third one), it’s marled (nuf said), it’s graphic (go solid stripes), it has a folded wide ribbed brim, and a wee modicum of je ne sais quoi that captivates.

Finally, the very best feature of this hat is that I don’t look dorky in it.

I have knit more than a dozen different hat patterns over the years, seeking that magic style that would flatter my weird head, big face, changing hair length, and glasses (not that there’s anything wrong with any of that, it just be). One thing I always know for sure is that I need a brim – without one, I’m all face and glasses and no hair. Bucket hats generally work well for me, but they really need to be crocheted, not knitted, in order to achieve enough body to hold up the brim. I crossed my fingers that this hat’s folded up rib would suffice…aaaaand…

What followed the first one off my needles (the top left) was the desire, nay need to have one in each of my coat colors: navy, turquoise, and dark purple (the hat in the upper left of the trio photo is purple – you’ll just have to take my word for it). Each richly saturated color is delightfully marled with a pale gray. In fact, I love knitting this hat so much, if you ask me nicely, or drop a hint, or look at me sideways, I just might…

Ah, yes. This is the As-Yet-Unnamed art deco-ish mosaic cowl of my own design. Notice anything? Anything at all? Anyone? Bueller?

This cowl is the only other project I have happily knit three (actually four) times. For all the same reasons as the striped hat, replacing marling with mosaic color work, I love knitting this project. And, as you can see (or will now that I’ve pointed it out) they are absolutely coincidentally knit in the same three colors paired with a neutral: navy, turquoise, and purple. Honest and for true, this had nothing to do with my coats, I was just going for different yarn types to see how they worked. Seems I have a type.

Aside: If I haven’t convinced you yet that mosaic knitting (aka slip stitch colorwork) is the bestest colorwork technique in the whole wide world, I will do so in a future post. Seriously, the bestest.

And thirdmost, thirdly, last but not least, I got all hooked on something totally random: a felted moebius basket.

This little binge was triggered by my want of a small-ish project container-type thing that would sit squishily between me and the arm of my La-Z-Knitter, in which I could tuck a ball or two of working yarn. I was all willing to spend cold, hard cash on such an animal, but couldn’t find the right thing on the Google. Surely, I can make one my very self, says I. So, off I went to Ravelry with my searchy fingers. There, I saw it. The late, great, Cat Bordhi’s Felted Moebius Basket. It was not only exactly what I wanted, but it was a new technique for me, moebius knitting.

If you’re not familiar with the magic of a moebius loop, think of a 3-d infinity symbol. A moebius basket is created by working a moebius loop, then “blowing apart” part of the loop, which become the rim of the basket, with a twisted handle. The whole deal is knit in one piece. This is not…I repeat, not a beginner technique. The moebius cast on is a hard core knitterly brain teaser.

You are not seeing things – that cable is going around twice, with a deliberate twist in it. A knitted moebius twist is worked from the center out to the borders. Wacky, yes? Who thunk this up anyway?

Here’s the knitted basket before and after getting chucked in a hot washer with a big ol’ scrubby towel:

For the uninitiated, felting happens when the microscopic sticky, snaggly little barbed ends of wool fibres get wet and agitated and all tangled up with each other. You may very well have inadvertently felted a wool garment of your own by allowing it into a regular wash cycle with your jeans, towels, or other aggressive laundry things. Superwash wools need to apply for this kind of project, as their sticky barbs have been intentionally tamed by one method or another in order to curtail the very effect that we’re after here. Fortunately for me, I had not one, but two perfectly tweedy, heathered, rugged Irish wools (the blue/purple one direct to me from Ireland – thanks, Cathy Mc!) that I knew would felt up into compact fabulousness.

I knit the first one in solid blue, was absolutely, completely, an thoroughly delighted, then couldn’t resist knitting a second with some contrast color. As I write this, I have yet a third one in progress in creamy cream with some forest green edges and skinny stripes.

And so. It seems that I have gotten over my phobia about knitting multiples. Especially since I don’t feel near done with any of these projects, each of which lends itself to an infinity of possibilities and color combos.

What pattern or patterns have you coming back for seconds, thirds, or more? What is it about that project that makes your needles sing?

Knit it and knit it again. You got this.

2 thoughts on “It Bears Repeating”