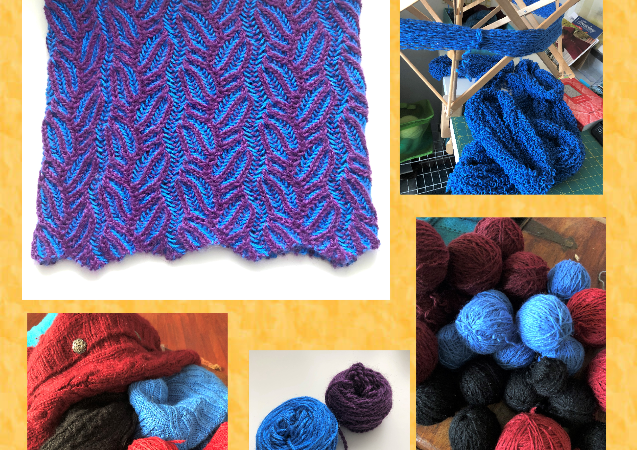 You might wonder why someone would deconstruct a perfectly good hand knit garment. After all, it wasn’t the sweaters’ fault. They didn’t do anything wrong. Sometimes people and their knits grow apart, is all.

There was time, about a decade ago, when I mistakenly thought alpaca was the answer to my wool sensitivity. It’s so fluffy soft that it couldn’t possibly make me itch, right? Wrong. Three or four alpaca sweaters later, I finally figure out that it’s actually worse than most decent utility wools. What that lovely alpaca halo means for me is a whole whack of fine pokey hairs nipping mercilessly at my dermis.

That trio of sweaters has been languishing in a dark drawer for years – just a smidge too worn at the edges to be decent hand-me-overs for someone else. So, what becomes of them? They becomes yarn again, of course, full of new possibilities.

Now, one can simply start dismantling and knitting the freshly frogged yarn without any further ado, but you might find it worth taking a few extra steps to truly refresh and reset the yarn, making it (almost) like new – especially if the garment had been washed, blocked, and set in its ways for a long time. It might not bother you, but knitting with super kinky and curly yarn annoys me something fierce, and worse, messes with my tension.

Step one: As you unravel, wind the yarn into balls to keep it from tangling.

Step two: Re-wind the yarn from a ball onto a swift or the back of a chair, and tie it loosely in several places. I usually tie it in 4 spots evenly around the skein. See those kinky skeins up there? Trust me, you don’t want to knit with that. The next steps will set it right.

Step three: Give the tied skeins a bath in tepid water with a splash of wool wash like Eucalan or Soak. Leave them for a good hour or more until the fibres are completely relaxed.

Yup. I know it looks like a tangled mess in there, but don’t fret, the ties will keep it contained in loops as you pull it out.

Step four: Remove the skeins from the bath and gently squeeze out the water. Then roll them in a towel for good measure.

Step five: Drape the damp skeins over a hanger and let them dry.

Step six: Put the skeins back on the swift and hand wind into balls or into cakes with a ball winder.

And voila! Refreshed, recycled yarn ready for a new project. I used the lovely pair of alpacas above to try out some fancy two color brioche in Nancy Marchant’s Ring of Fire cowl.

I know what you’re thinking, and you’re completely right, I still can’t wear it because of the itch factor. It will either become a nifty gifty or I’ll keep it as a teaching sample, if I happen to do a brioche class. I also just like having it around my studio, because it’s pretty.

Of course, the world is chock-a-block full of brand spankin’ new yarn, but there’s something inherently, thriftily, satisfying about reincarnating a less-loved hand knit. Everyone deserves a second chance, yes?

How about you, dear knitters? Got any knits sitting around asking to be refreshed into something new?

Happy frogging and knit well. You got this.