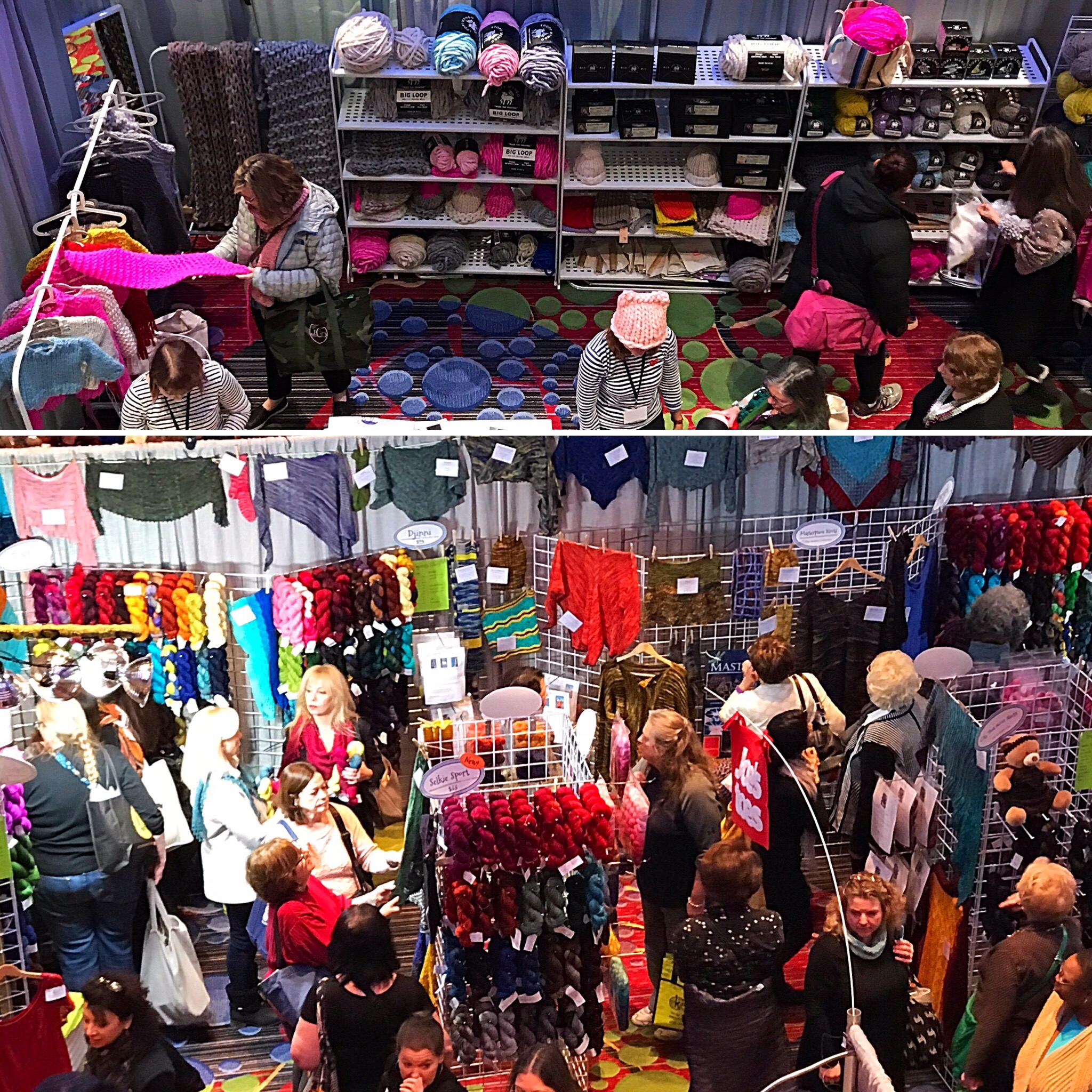 Yes, I’ve been AWOL, but for a very good reason…really, honest, and for true.

My very perfect and wonderful HE (Husband Equivalant) surprised me on Christmas Day with tickets to NEW YORK CITY, which was incredible enough and brought me to tears…

I opened a box that contained an email telling me I was also registered for VOGUE KNITTING LIVE!!!!

I totally lost it – I screamed, I cried, I jumped up and down. I WAS GOING TO VK LIVE IN NEW YORK CITY!!!

I know, I’m yelling a lot, but that’s pretty much how it went.

We left on the afternoon of Monday, January 9, and arrived home on the red-eye way early this Tuesday morning. Seven action-packed days in the city, which included 100 km of walking and two full days at VKLive. I could have gone for a third day, but there was no way I was going back in that marketplace without putting a few more notches in my credit card, and there was so much more of the city to see. Sometimes sacrifices must be made.

You can see why I was a spendy-spenderson – there was sooooo much selection in the marketplace (it took up the better part of two floors of the hotel), it was a real challenge to decide which of the ten million skeins of yarn I could afford to make my own:

I managed to do a fair bit of damage in a few measly hours. Cha-ching, cha-ching. My credit card is still whimpering a bit.
I wasn’t through the door five minutes when I found Yarn Culture of New York, where at least a dozen amazing shawls caught my eye. I was most enamoured with Amor Esperanza’s design, CoLab. It must be a brand new design, because I couldn’t find it anywhere on Ravelry or her websites. I stuck with the light grey base, but chose some brighter accent mini-skeins from Molly Girl Yarn for the stripes .

This will be my official “New York” shawl. The best souvenir I could think of. I bought lots of other cool things, but I’ll share over the next few posts, because I don’t want to overwhelm you (or embarrass myself).

I am a HUGE fan of Purl Soho, and I tried and tried to get into their closet-sized booth in the marketplace, but it was always jam packed with drooling people, making it impossible to browse with any efficacy. So, on the day we were wandering around the lower east side of Manhattan, I made a point of steering us in the direction of their shop in Soho.

I knew I would be yarn struck there, but I wasn’t prepared for the crushing urge to leave with one of everything – EVERYTHING. I want it all – the yarn, the kits, the felted ornaments and animals and wreaths, the sewing kits, the weaving, the beads…every single item is stellar quality and stunning. Sigh. If you’re not familiar, I urge you to check out the website. Yes, the goods are pricey (especially considering the current state of the Canadian dollar), but lots of the patterns are free. I put the link above, but here it is again: Purl Soho Go. Now. Look. Tell me I’m wrong.

As for classes, I took a day-long Principles of Design course from Catherine Lowe. It was chock a block with info about designing, finding your esthetic, how to get work, and more. Sadly, the more I learn about knitting pattern design, the more I realize that it may not actually be something I want to do…at least not for income. Yet another craft industry where the designers/crafters are at the bottom of the totem pole when it comes to distributing the proceeds from the sale of the design. The short story is that you better love it, because you won’t get rich, or probably even self-supporting, from it. I may just stick with adding my own touches to other’s designs, or designing strictly for myself. Sometimes a little education is a dangerous thing.

I also took a simply marvelous class from Amy Herzog. Amy is a sweater fitting expert and I have most of her books. She is a wealth of knowledge. I wish I could have taken every one of her classes. She also had a table full of samples of her designs. They are reallyreallyreallyreally gorgeous, flattering, and wearable. Often when I see  lovely designs knit up, I’m disappointed because they don’t look as appealing as they did in the pattern photo – Amy’s work was the exact opposite. I wanted to knit and wear almost every single sweater on that table (and there was a BIG pile). Click on her name in blue there and check her out. She has my highest recommendation.

I wore my Acorn Trail cardi to the class, and she was most impressed with the collar I added:

Well, there’s lots more stories and catching up to do (I know, three week’s worth), so you’ll hear from me again before the weekend is out.

I’ve got knitting to do!!