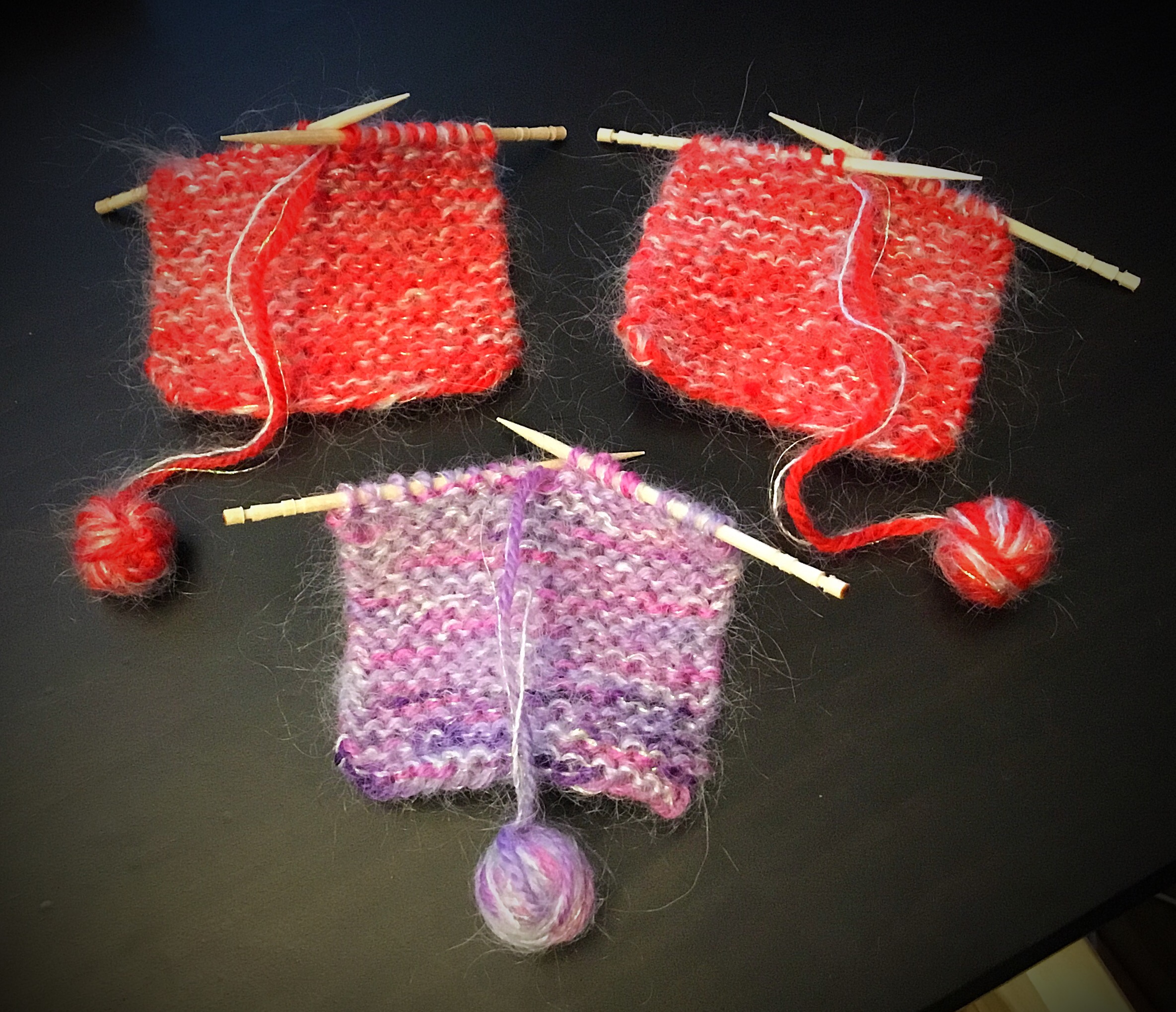 I’m pretty sure I should be freaking out with anxiety-itis about now, but…nope.

Believe it or not, I’ve got things under control. Never mind that I just cast on my final Xmas gift today – I’ve got it in hand (literally – it’s a pair of fingerless gloves).

Last week, however, was a different story. Hence, the missed post last Sunday. Oh wells. I feel a smidge guilty about it, but the sky didn’t fall, so…we move on.

Here’s a few things I’ve been up to in the last fortnight:

Last year, my Wicked Step-Mother (aka WSM, and not a wicked bone in her body) gave me a variation of this ornament. Actually, she gave me two.

As I placed them on the tree this year, and marveled at their kniterly perfection, I realized that I could most certainlylikelypostively figure out how to duplicate them, AND that they would make perfect gifts for my knitter students at the office – especially since I had purchased a giant box full of blank ornaments intended for the lacy ones I feebly attempted a couple posts back.  Realizing I would need the tiny needles, which, after careful inspection, I realized were merely fancy toothpicks, I called on my buddy Amazon and ordered up 360 of the little suckers.

For about two seconds, I contemplated knitting directly on the toothpicks. Nopeity-nope: too small, too rough, too short. Sheer madness. Turns out my 2.5 mm Addi Lace circs were parfait. So, with one strand each of the color, the Haze, and the blending filament, I went to town. A couple of fumbly attempts later, I had it down. Much to my delight, the little suckers only take about 20 mins from start to finish. Whoop whoop! Four days later, I had finished 20 of them.

They were such a hit with my studientos, that I’ve made four more since for some muggles (non-knitters) who gushed over them.

I lurve them very much. I’ll crank out a few for myself, when I’ve got time.

The cuteness is a little overwheming, I know.

AND, I have something for the Cast Off department that’s been lingering in WIPPING for some while:

The Mason’s hat is Ta-Da!

I was having my doubts – it was taking forever to knit in 2×2 rib, and it seemed like it was going to be waaaaay toooo big. I just wasn’t sure I was feeling it.

Then, something magical happened…as I worked the crown shaping, it all came together and I started to like it, and like it some more, and the like it reallyreally a lot.

It’s ribby, squooshy, cabley deliciousness. However, heed this warning: THIS IS NOT A QUICK KNIT. Be certain that the recipient is worthy before committing to gifting this project.

As a bonus, the crown looks pretty cool, amiright?

Now, I just need to finish the Traverse mitts in the same yarn (this be what I cast on today) and

There’s actually more, but I big time need to get back to my needles tonight. Tick tock and all.

Next post will be tardy, as Sunday falls on Christmas Day, but I’ll do my best to get to it Boxing Day-ish.