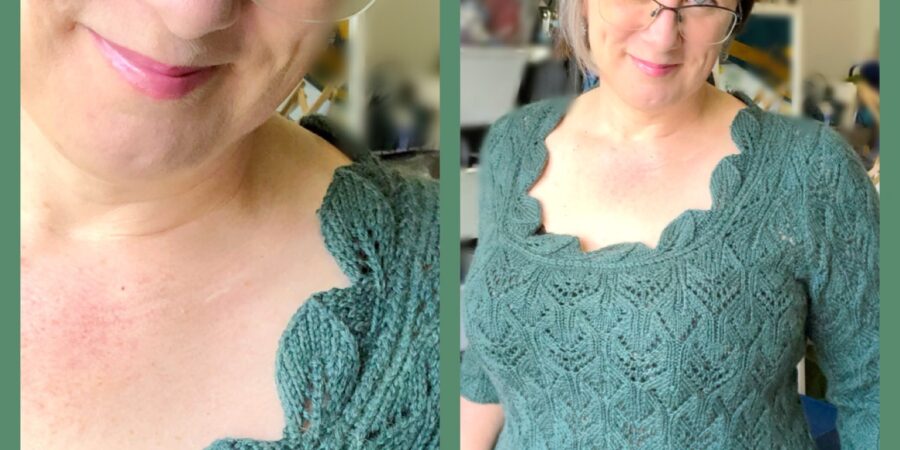 In case you haven’t noticed, I’m a sweater knitter. Yeah yeah yeah, on occasion I dabble with shawls and cowls and socks (oh, my!), but sweaters are really my jam. Now, I’m going to admit something that the knitting industry tries to downplay (gotta sell those patterns and yarn and classes, after all), but most knitters know in their hearts and minds: sweaters are hard. Leastways, sweaters are hard to get right.

I know, I know…I’ve read you the riot act over and over how careful prep and planning can help you get the sweater your little heart desires, but there’s one teeny tiny little detail that I may have held back…you can’t try on your sweater before you knit it.

Seems obvious, right? Not so much, though. As knitters, we have this tendency to see beautifully knit sweaters that fit, flatter, and fabulous all over a model, following which a glittering neon sign flashes in our eyes: I NEED TO KNIT THAT. And we are perfectly aware that this coveted project will be a gamble, a crap shoot, a shot in the dark, but we smugly wave off that negative-nellie nonsense, gather up our soft, pretty yarn, and cast on with blissful knitty abandon.

Of course, our sweater progresses flawlessly, techniques are mastered, colors blend and contrast sublimely (yeah, like any of that ever happens), and we cast off the last stitch, weave in the ends, block the finished garment into smooth, even-stitchy perfection, slip it on our body, barely able to stand still in expectation and……….oh, crap…it’s not right. It’s too short. It’s too long. The neckline looks stupid. It pulls over here and sags over there. WHY DON’T I LOOK LIKE THAT DAMN MODEL????

The real, honest-to-goodness truth, dear knitters, is that is goes like this for me more often than I care to admit.

“No way!” you exclaim. “Way,” I reply. But here’s the thing – I’m okay with that. No, really, I am. Two positive things happen for me when a finished sweater doesn’t work: 1 – I learn something to watch for next time; 2 -I have an opportunity to creatively fix whatever’s not working. Most times, I can accomplish some or most of this before casting on, but there’s simply no way to know for sure until you can try it on. However, you can fix a lot of stuff without starting over, if you’re willing to shake off the disappointment and experiment a bit. Remember – it’s yarn. It can almost always be unraveled (or raveled, depending on your local vernacular) and used again. Yarn does not get “broken” just because you’ve already knit it once.

As you know, I’ve been knitting Patty Lyons’ Gramercy Park lace pullover for a couple months. I finished it. Twice.

I knew before I started that the crew neck wouldn’t work for me, so I planned to modify it to a deep scoop. I started the neckline shaping on the same row as the start of the armhole shaping. I bound off a few more center stitches than the pattern called for to create a wider scoop at the bottom. Then I worked roughly the same curve shaping as the pattern on each side until I had the same number of shoulder stitches left as the pattern, then worked straight to the shoulder shaping. After blocking the front and back and joining the shoulder seams, I picked up neckline stitches at roughly the same rate as the pattern instructed, picking up more stitches along the straight sides. As the original neckline finish was plain ol’ stockinette, the actual stitch count didn’t matter much. I followed the rest of the neckline finishing as written.

Here’s how that turned out:

Yup, it’s perfectly fine, however…I didn’t spend two months knitting time to settle for a “meh” sweater. There’s too much of, well, me showing for my taste, and that simple rolled stockinette edging wasn’t floating my boat either. Not that there’s anything inherently wrong with that finish – it’s a perfectly elegant treatment for the crew neck version, but it felt too skimpy and basic for my deep and wide scoop.

Hence, I undid the bind off and frogged the edging back to the first row of picked up neck stitches. Then I started experimenting. First, I tried a few repeat of a simple eyelet pattern, but it was more textured than the lace and didn’t blend well. Then, I tried a slightly fancier eyelet pattern, but that wasn’t turning my crank either. I realized what I really wanted was some kind of fancy scallop-like edging that echoed the pretty lace pattern. I scoured my stitch dictionaries for edgings that were worked from the bottom up (in other words, the bound off edge would be the finished edge of the scallop), but nothing was quite right. During my search, I kept encountering a charming leafy edging that is knit crosswise instead of lengthwise. I had little interest in knitting a separate piece and sewing it on, so I passed it over. But after failing to find anything that intrigued me anywhere near as much, I came back to it. It occurred to me that I could use the knit-on icord technique to work this edging perpendicular to the neck edge, incorporating the live neck stitches at the beginning and end of each row, as I worked my way around.

Feeling all smart and whatnot, I was off to the races. I checked the number of neckline stitches I had already picked up against the 18 row pattern repeat and realized I’d need to either pick up or eliminate a few stitches as I went. I chose to pick up the extra ones I needed. Gauge-wise I figured it more stitches would prevent any possibility of the edging pulling the neckline out of shape. Besides, it would be apparent pretty quickly if the gauge was off and needed adjusting. Fortunately, my educated guess paid off and all went according to plan. I’m really kicking myself now for not taking pictures during this process, but I was pretty focused (and, ironically, probably watching TV at the same time) and just didn’t think of it.

Did it work? Oh, yesiree Bob, it worked.

Just to prove this isn’t the first time I played silly buggers with a finished sweater, here’s another example.

This is a pullover I knit a few years ago called Sandy:

See that skimpy seed stitch hem down at the bottom (yeah yeah, where else would a hem be)? I didn’t love it. The sweater ended up a bit on the short side, not to mention it was awfully snug, so it needed something more substantial to keep the hem from riding up to the narrowest part of my waist.

I’d seen some sweaters with layered look hems and thought that might be cool, so I picked up stitches behind the existing hem and worked a new one in a textured rib underneath:

After finishing the new hem, I decided the double layer was too bulky and looked weird, so I cut and removed most of the outer hem, then sewed the remaining band down over the new under hem:

Now, that’s a groovy looking hem! But was I done? Nope, not even.

Then I decided the sweater was too tight and I’d get more wear out of it if it were a cardigan. So, I steeked it and added front bands to match the new hem.

Excellent! I must have been happy then, right? Nuh uh.

Next, I decided I didn’t like the rounded neckline and wanted a V-neck instead. But but but…you’d have to reknit the fronts for that!!! No way, Jose. I a moment of so-crazy-it-just-might-work frenzy, I reinforced the fronts and cut them. I CUT THEM.

Then I reworked the neck edge. This part was neither easy nor straight-forward, but somehow I figured it out.

Exactly what I was going for. Then, a few wearings later, I washed it, left it soaking in the water too long, and the green dye ran into the white. I was so disgusted that I folded it up, put it on my sweater shelf, and haven’t touched it since. Perhaps I’ll work up the motivation to try and un-bleed it. Perhaps.

I suppose the moral of these stories is that you can get pretty close to a perfect sweater with some planning, but if you’re prepared and willing to make some after-market changes, sweater-y nirvana can be had.

Have you ever tried to modify your finished knitting? Got an imperfect sweater kicking around that might benefit from some surgery? Let me know and I’ll see if I can conjure up a creative fix for you.

However, if you’re one of those critters who are all about moving on – knit the next one well. You got this.