Skip to content
— Baby, Cardigan, Fair Isle, Knitting, Knitting in the round, Steeks — 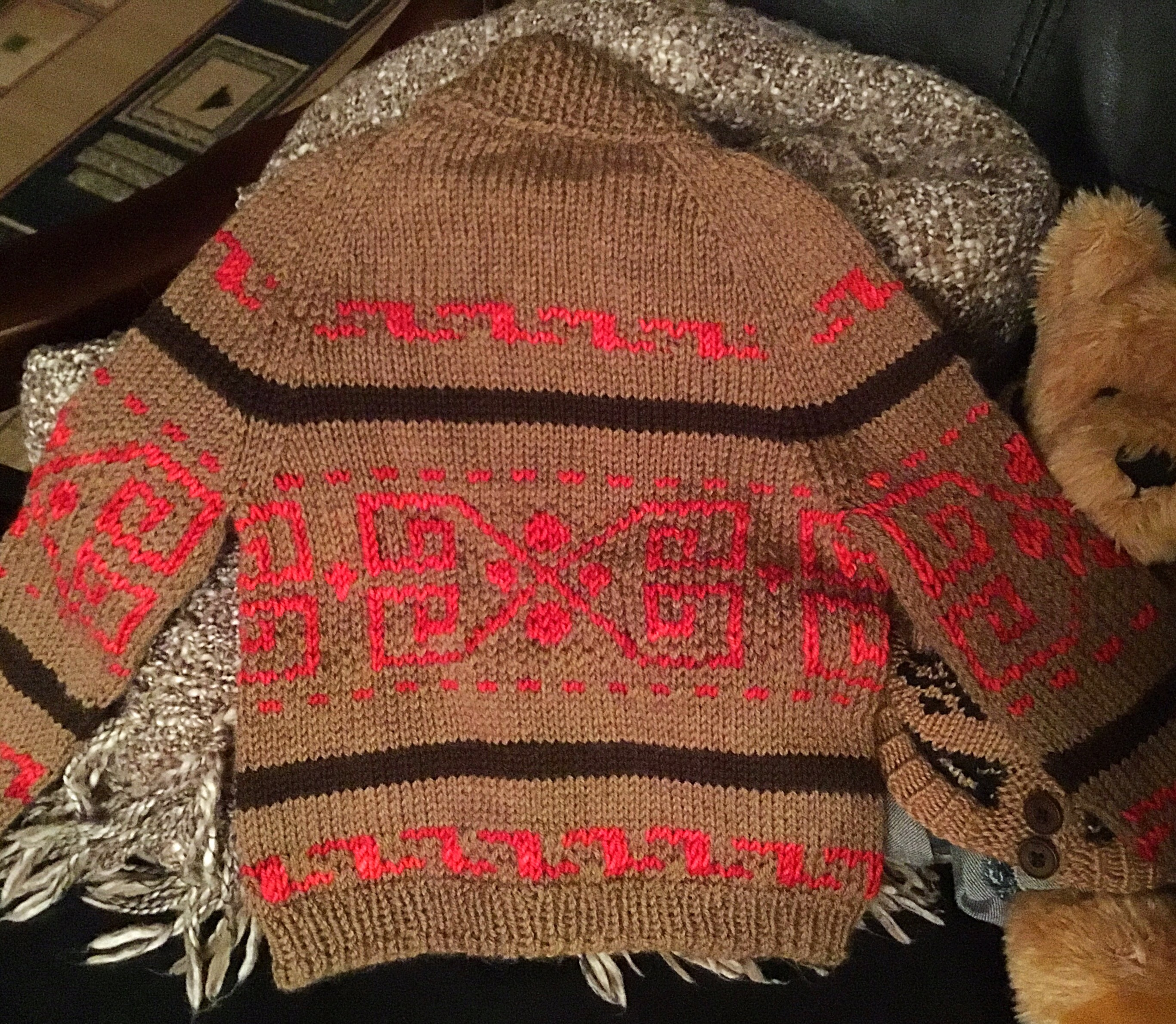 I am such a smarty-pants-know-it-all. Patterns, shmatterns – when you really know what you’re doing, they are just guidelines, right? Sometimes, even the smarty-pantsest of us need to follow direction and take advice. Especially when doing something we haven’t done before…

That sounds a lot like EEEEEK for a reason.

In case you’ve never encountered this term before, allow me to enlighten you. A steek is a panel of extra stitches added to the center front of a cardigan, which allows knitting the body in the round from hem to neckline. Then, when you’re done knitting, you cut up the center of the steek panel to turn what looks like a pullover into a cardigan.

Did you catch that? You CUT through your knitting. Scary scary deal, even when you know what you’re doing.

The pattern is The Little Dude, and I knit it for my super sweet first cousin-once-removed. His mom and her sister are a generation younger than I am and have been more like my nieces than my cousins. They rock and I love them and their off-spring and they deserve nice things.

Here’s what the knitting looked like before and after cutting the steek open:

Yup. I cut right up the middle of that steek – and it didn’t go as well as it should have. Despite my prudent reinforcement by machine sewing through the stitches on each side of the center steek stitch, stuff unraveled way more quickly than I expected. In the end, I made it work and I learned some things, but there was much sweating and grumbling under my breath in the process.

There are two things I could have done to make my life, and this steek, easier to handle. The first one is that I should have followed the pattern designer’s oh so wise advice to NOT USE SUPERWASH WOOL when you’re going to cut through a steek. You see, there’s a reason those wooly fuzzy Fair Isle sweater are fuzzy and wooly. That fluffy halo you see on Shetland-type yarns is what gives the yarn a natural tendency to felt (which is why tossing your wooly knits into the washer and dryer will turn them into tiny, cardboard-like versions of themselves). That felting helps the stitches stay put and not want to slither out of formation the minute you turn your back. Superwash wool, however, has had the feltiness treated right out of it, so you CAN toss it in the washer with (sort of) wild abandon.

All that makes good sense, right? So surely I stepped away from my superwash stash and invested in some nice, fuzzy Shetlandy wool for this project…

Nope. I used superwash. I had it right there in my stash…all the right colors…and it’s for a baby, so it needs to be soft and washable…and besides, I wanted to start knitting RIGHT NOW! You know how that goes.

Now, having said all that, I now know that there’s something I could have done that would have made my bold yarn subbery more viable: more stitches in the steek. This pattern only called for 5 steek stitches. That’s one in the middle (that will end up cut in half), and two measly guards on each side. That may be plenty, if your yarn is sticky and fuzzy and won’t slither, but, as I discovered, it’s not enough for uncooperative yarn types. If I knit this again (and I might, cuz it’s cute), I would add at least two more stitches to the steek, probably three. This would allow a much bigger buffer on each side of the cut edge, and it would allow more fabric to roll under and stitch in place on the wrong side, which is very messy and upsetting when all the knitting is falling to pieces under your fingers.

So, there you have it. I made some mistakes, but they weren’t deadly. The sweater turned out quite nicely in the end…

And my cousin-once-removed looks pretty darn cute in it…