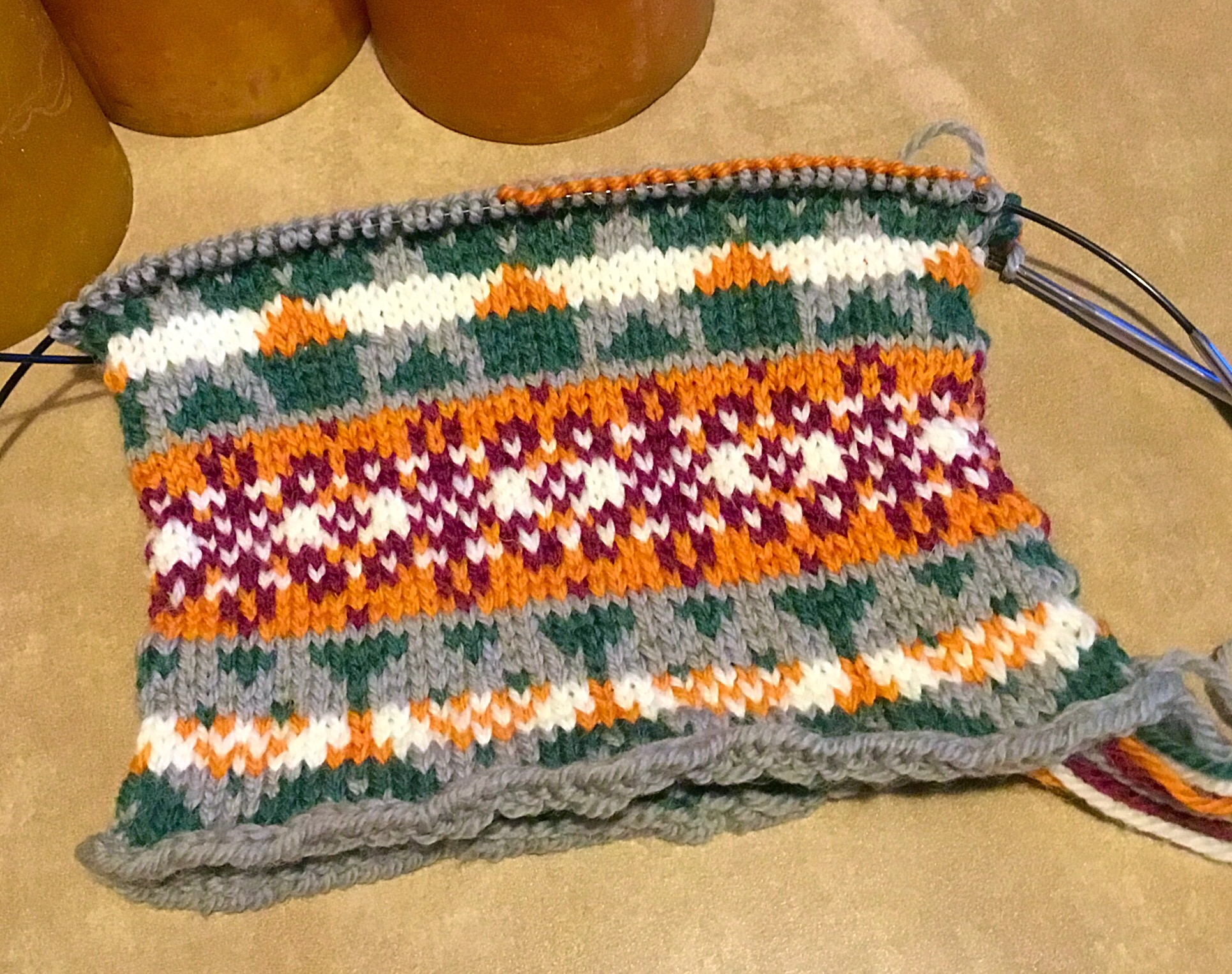 I have a confession to make…

I made a mistake on a project this week and instead of frogging and starting over, I tried to cheat. I’m very ashamed.

I started knitting my granddaughter’s first Christmas stocking (she’s almost 10 weeks old and she will NEED this stocking next month). I’m using the same pattern I used last year for her brother’s stocking, but I changed up most of the colors and decided to use different Fair Isle patterns in each segment.

This is last year’s:

You see, the Hearthwarming Stocking is designed so that you can “plug and play” with a bunch of charts provided with the pattern. It’s a kinda sorta design-it-yourself deal – although you can buy the kit and make it exactly like the sample, if you’re not feeling brave.

Okay, so you’re working with new colors and new patterns – did you knit a swatch? (You rightly ask) Nope. Dove right in. Time’s a wastin’

Remember that adage “haste makes waste”? Me too, but I didn’t think it applied to me. After all, I’m experienced, aren’t I? I should be able to haste all I want.

Sigh. I made it as far as the afterthought heel set-up (this is sort of a toe up sock – the foot and leg are knit first, then the toe is picked up and knit down, and the middle of the sock opens up so you add the heel later. Hence, the “afterthought” label. I’ll show you when I get there), then realized that I had misread the chart and didn’t add the white into the charts where I was supposed to. It looked okay, but too dull.

I frogged back about 8 rows and reknit the last section with the white in it.

Here it is at that point:

See the bits of white near my fingers? Brightens it up, don’t it? Yes, it does.

Then I thought I could duplicate stitch the white into the section near the scissors. I did about 6 stitches, realized it was complete folly, and bailed.

Then I thought I could pick up the gray row between the sections, frog from the bottom up to that row, and reknit that section back down. You can just see in the photo where I ran the needle through the gray stitches next to the first red row. Then I realized that all of the stitches would be off by 1/2 a stitch, because that’s how it works when you try to knit in the opposite direction.

Thennnnnn, I stared at it for a while and decided that it really needed some white in the 13 row chart, too. Yeah, it does so.

I whined. I grumped. I let go of the painstingagony  of wasting at least 4 hours of knitting time. ARRRRRGGGGGGGHHHH.

I frogged, leaving the first 5 rows intact. Then reknit, changing both the 13 row chart and second 11 row chart.

I made it to here today:

Of course, the stocking above. But also I did this reasonably, fairly, kind of exciting thing:

I designed this all by myself! I guess all that messing around last week with the cowl gave me knitting superpowers or something and suddenly I’m not all squeamish about making stuff up. I’m calling it the S’Cute Hat, cuz it’s cute. I posted the pic on the Knitting group on Facebook and lots and lots of folks are all “gimme that pattern, please!” So, I’ll knit a few more samples, write it up, post it to this site, and it will be my first freebie design.

Cool, right? Are you as stoked as I am? I knew you were.

Viola! A Triplet Basket. I loooooove this project. It’s just the bomb. Can’t you just see it all stuffed with yarn? I knew you could.

Now I want to knit one loosely and see what happens if I felt it a bit. Not too much, though. I want to keep the texture, but just blur it and tighten it up.

Just for fun, here’s how the bottom looks:

A groovy spiral happened. Couldn’t have done that on purpose if I tried.

Also, I finished the painful and not-fast-or-fun-to-knit Snowball Ornament.

It’s knit on double-pointed needles (don’t try to magic loop it – trust me on this one) up to the midpoint, then the ornament is tucked inside the rest of the LACE is knit on 4 dpns with the ball in place. This is a very fiddly and frustrating process. The ball tried and succeeded in escaping several times. And the worst part…I had laddering between the needles because it’s almost impossible to pull straight things tight together on a round ball. Go figure. I may give it one more try and see if it gets any easier/better, but I wouldn’t lay money on it.

The Alison Pullover and Mason’s Hat got no love this week. They are snoozin’ while I finish stuff with shipping deadlines.

That’s it kids. Have a great week and catch you on the flip side!